After the devastating tornadoes struck, the organization that I work for stepped up and sent out emergency medical crews to affected areas where there was a demand for medical help. I work for an amazing company that cares about its employees and is there to help and offer support in a time of crisis. Besides sending out medical crews to give aid, they were also forming volunteer groups to help employees and their families affected by the tornadoes. Last Saturday a group of volunteers met in a small town about 25 minutes away to help clear debris from a destroyed home. The home was the parents of an employee. Her mother was injured and was at the hospital recovering.

This is what I first saw when I pulled up to what was left of the home.

Volunteer work crews had already started making large piles of debris and pushing everything up to the road for FEMA to pickup. 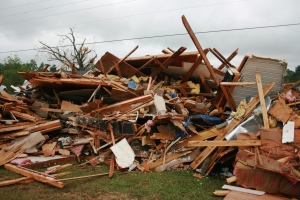 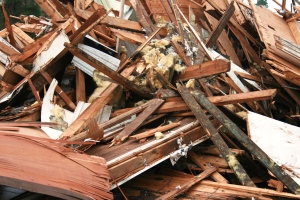 This old car did not belong to the family we were assisting. It came from down the street several houses away.

I love this photo because amidst all the rubble and debris, a lone glass jar of beans stands unscathed. Kinda cool.

If you look closely in these photos, you can see clothes stuck up in the tree. There were several reports from people not just in this area but also in other affected areas that when they walked outside, they saw bodies everywhere in the trees. What most people initially saw were all the clothes in the trees and mistook them for people. 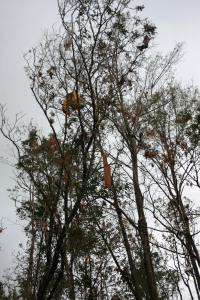 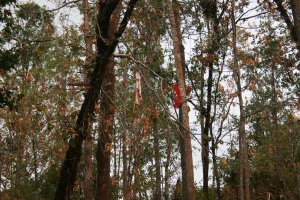 After I took some photos, I put my gloves on and got to work. Since I am dangerous around chain saws or anything electric like that, I just picked a spot and worked on separating the wood debris from the trash and metals. After the men cut the trees, we helped to move the wood to piles. 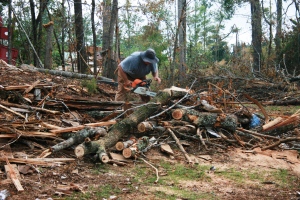 It was heartbreaking to sort through other people’s belongings. We found small army men, wrestling figurines, and toys cars. I even found a Toy Story pillowcase. That got to me a little, because Bugaboo loves anything Toy Story and I knew that this debris came from a home where there were small children. Some workers found a social security card and license. We bagged those items. They belonged to someone from up the road. There was not a lot left though. Most things were completely destroyed. 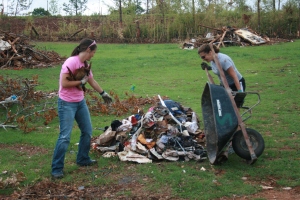 A couple of hours into the work morning, the owner of the home, an older gentleman, Mr. H, stopped by to thank the volunteers. He just stood there for a moment looking around at what was left of his “home.” He just shook his head and said that it all just happened so fast and he and his wife didn’t have that much time to prepare. 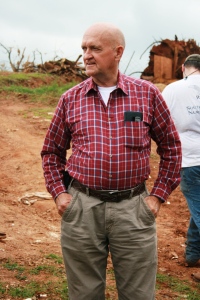 Mr. H said that he was in one room watching the weather on TV and his wife was listening to the weather alerts on the radio in another room. They heard that the tornado was in a town about seven miles away and thought they may be fine but then they heard a news announcement that tornado was in their area. He said that he turned the TV off and was shutting the storm door between the room he was just in and the kitchen when his wife opened the back door of the house. He said that all you could see was a mass of black barreling towards them. He met his wife in the kitchen and they didn’t have time to go anywhere else so they just knelt together and held on to eachother.

It sounded like a freight train going through their home. The house started shaking and the storm door and wall blew away. He said that he and his wife lifted off the ground and they just hung there for a second.

Before he knew it, they were ripped apart.  He choked up at this point and had to catch his voice before continuing. He said that he tried holding on to her, but there was nothing he could do. In one moment, they were suspended in the air and in the next moment, they were thrown outside about twenty feet. 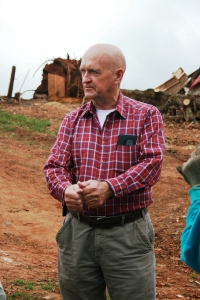 Mr. H said that he was sore and bruised but knew he was alive and ok. He was worried about his wife and started calling out to her. After what seemed like forever to him, he heard her voice. She was alive. She had some broken bones in her leg and there was something with her hip but she would be ok.

A volunteer who had listened to his story told him that he was one lucky man and I loved his response. Mr. H said, “It wasn’t luck, it was the grace of God.” 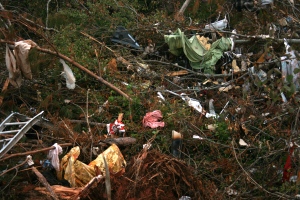 He was so thankful that he and his wife were alive that he didn’t care that his home and belongings were destroyed. He was a very sweet pleasant man who had a great attitude despite everything that he had just gone through. If asked if he would rebuild or not, he said he didn’t know yet what their future held. He knew that  their lives were spared for a reason and he wanted to follow God’s will and see what His plan was for them next.

My recount of his story is nothing compared to hearing it from him. As I reread through what I wrote, I know I left several things out, but I couldn’t remember exactly what he said, and I don’t want to add to the story or anything.  A co-worker recorded him on her iPhone while he spoke and if I can get my hands on it, I will definitely post it on here. I apologize in advance if I added anything in error but the recount will be corrected once I get the video. I wish I would have written down everything that day so it would still have been fresh in my mind, but I left the clean up to go straight to GQ’s double header baseball game and was at the ball fields for the next 5 hours… more on that tomorrow!

Tomorrow is Friday… Friday… gotta get down on Friday… everybody’s looking forward to the weekend, weekend…ha-ha sorry, got lost in the moment. Now that song will be stuck in my head and yours ALL DAY LONG 🙂